How Many Extra Meals Are You Carrying Around? 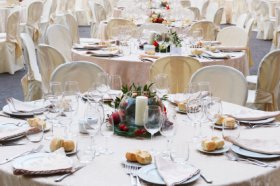 Here’s a different way to look at all the extra fat you’re carrying around.  See, your body stores any extra calories you eat as fat, right?  Your body thinks, “Hey, it might be a while before we get some food, so let’s stash away all this extra energy.”

The problem is, for most of you reading this, the next meal is not very far away.  You don’t even have to go out to “hunt and gather”—chances are you’ll “walk and raid (the fridge)” or “drive and order (some fast food).”

So, for every 3500 extra calories you eat, your body gains 1lb of fat.

Let’s say, for the sake of argument (and easier calculations!) that an average, healthy meal is 500 calories (normal portion consisting of protein, carbs and some fat).

Again for the sake of argument, let’s call an average amount of calories for a woman to eat in a day 1800 calories.  If you’re carrying an extra 50lbs of fat around, you’ve got the equivalent of 97 days worth of food.  97!  More than 3 months!

You don’t need to be carrying all that “just in case there’s a famine” fat.  Instead, eat less calories (and eat better), move more and let your body burn the extra fat as fuel.

Whenever you go to eat something, just think of eating a bit less and letting your body tap into the energy you’ve got stored in your fat cells.  It’s why it’s there…

Is Your Exercise Equipment Gathering Dust While Your Hips Gather Fat?

Suzanne Hiscock is a PN L2 Certified Master Coach, ACE-certified Health Coach, as well as an ACE-certified Fitness Nutrition Specialist. For over 20 years, she's been helping people lose weight and get fit through her website, FitWatch.com.

And she’s really TRULY SORRY ABOUT THAT. You see, she didn’t realize she was contributing to diet culture; she just wanted to help people feel better. But losing weight isn’t the way to do it. She’s on a mission to change all that with an anti-diet approach. So, pardon the dust on the floor as the website gets revamped.

Just a heads up the focus of this website is slowly changing to one of an anti-diet approach. Read more about it on my About page.